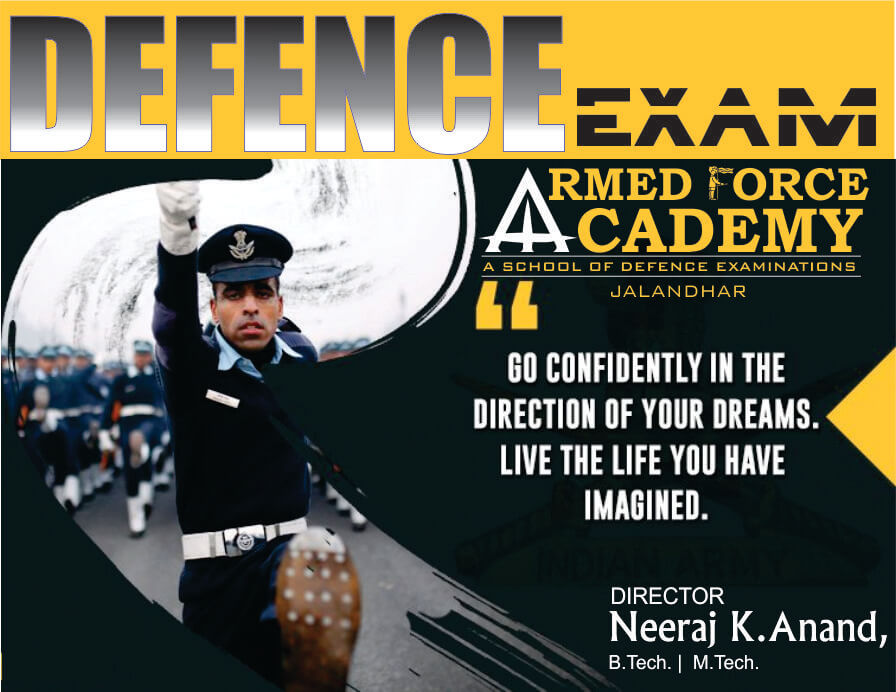 Fresh batches for Army Cadet College (ACC) Exam are going to start. ANAND CLASSES Coaching Institute is the only well known coaching institute in Jalandhar that provides coaching for Army Cadet College (ACC) Exam. At ANAND CLASSES Coaching Institute, we constantly strive to improve our teaching methodology, study material and classroom assignments. The Course Methodology is dynamic as it takes into account the changes that we notice in the pattern of the examination.

What is ACC?
Army Cadet College (ACC) is an institution which trains Officers, for the Indian Army. The Army Cadet College Wing trains soldiers from the regular army for commission as Officers in the Indian Army. The ACC feeds into the Indian Military Academy Dehradun. The nature of training at ACC and NDA is nearly identical, both run a three-year degree course in science and humanities. The added advantage that the ACC cadets bring to the Army as officers are a deep understanding of the soldier life and a consequently better appreciation of the tasking of the men.

ACC has now been rebranded as the Siachen Battalion at the IMA.

The selection for admission to ACC is based on a written test and subsequent selection via Services Selection Board. ACC has been in operation for 80 years now and has graduated some notable alumni. The first course at IMA comprising 40 GCs included 15 from the erstwhile Kitchner College that became the ACC. The first Sword of Honour at IMA was Smith Dun, later COAS Burma.

Unfortunately, the entry criteria for ACC (oft changed) means that most officers would retire before ever becoming the COAS in India, due to age constraints at promotion to higher ranks, irrespective of performance. Many an exceptional officers have graduated from this highly aspirational institution.

The foundation of ACC can be traced to the Kitchener College founded in 1929 at Nowgong, Madhya Pradesh. The Kitchner College became the ACC in 1960, and in 1964 it relocated to Ghorpuri, near Pune, to take over the campus of the erstwhile OTI (merged into OTA Madras). The institute moved again in July 1977, this time to Dehra Dun, to become a wing of Indian Military Academy.

ANAND CLASSES – ARMED FORCE ACADEMY offers coaching for the Army Cadet College (ACC) written examination. The faculty at ANAND CLASSES is highly qualified and vastly experienced in successfully coaching students for ACC examination. Not only do ANAND CLASSES cover the entire syllabus subject by subject as per UPSC, we also prepare our students with mock tests, previous year question papers and doubt clearing sessions which are conducted each week to monitor each student’s progress. Mock test/ weekly test results are also discussed to pin point where the student may be lacking. This ensures that the students know what to expect in the examination, how to approach the examination, manage time efficiently and get the best possible results. Experienced and updated faculty teaches students how to handle the NDA examination specifically; they focus on the format and type of questions likely to be asked in the exam. Students can learn many formulae and shortcuts to get quick and accurate answers while attempting the examination. Apart from this, we provide extensively researched study material which helps students to easily access, organise and systematically approach the vast syllabus.

ACC stands for Army Cadet College , is an institution which selects and trains regular army soldiers to become an officer in Indian army. The selection for admission to ACC is based on a written test and subsequent selection via service selection board. The nature of training at ACC is same as that of the NDA and ACC candidates complete there 3 years degree course while training. ACC exam syllabus and paper is divided into four parts. Following is the information in detail.

PAPER –I: GENERAL MENTAL ABILITY TEST : General Mental Ability test (GMAT) paper will be aimed at testing the candidate’s intellectual ability.This paper have two types of questions – Argument and data Sufficiency. There will be 150 objective type questions of two marks each. The paper will consists of three sections:

PAPER – III: INTERACTIVE COMMUNICATIVE ENGLISH Questions in this component will be designed to test the candidate’s understanding and knowledge of English language in particular the communicative skill. There will be two papers for Interactive Communicative English. Part I will consists of 120 objective type questions of one mark each for a duration of one hour. Part II will consist of descriptive type questions for 180 marks for a duration of two hours.

PAPER –IV: ACADEMIC CONTENT TEST There will be only one paper covering Mathematics, General Science and Humanities. There will be a total of 150 objective type questions of 3 marks each Topics to be included in each paper and the distribution of marks will be as under:

Mental ability test is the easiest of all the topics which can be learned through some practice, Learning English is a long process.

After going through the ACC exam syllabus you must have realize how vast the syllabus is, it is hard and hence device your plan accordingly , you need 3 to 4 months of constant practice. Daily one to one and a half hour of intense practice is more than enough to pass this exam.

HOW TO APPLY FOR ACC EXAM?

ACC entry scheme is only for serving Indian army soldiers and not available in public domain. One needs to contact the concerned department of his unit to apply for such entries.

Results of the ACC written exam in 3-4 months after the written exam. The same can be viewed onhttp://joinindianarmy.nic.in/. Being a competitive exam and there is no fixed cut off percentage for passing. Candidates who perform better are sent the call letters for SSB interviews. The final merit list is prepared after the SSB interviews final result and displayed on the Indian Army website. Joining instructions are sent to students based on vacancies available as per the merit list.