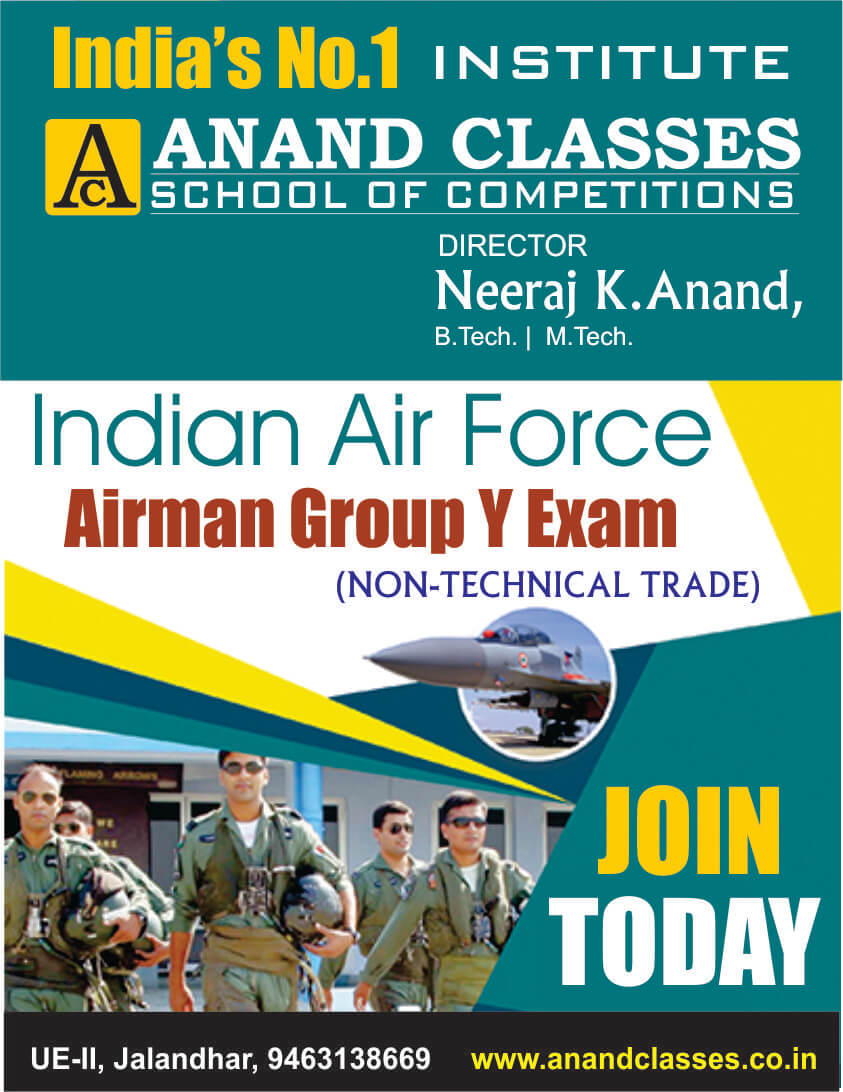 Airman in Airforce is considered equivalent to a Soldier in Army. Indian Air Force provides ample of opportunities for the young men joining as an Airman in either of Technical or Non-Technical trades. Aspiring candidates can choose from any of the three i.e  combatant groups i.e ‘X’, ‘Y’ or ‘Z’ of the technical and the non-technical trades depending upon their interest and eligibility.

As a Technical trade Airman the job description involves the maintenance and testing of aircraft and other various flying related equipment besides involved in maintaining and overhaul of ground equipment and armament.

Where as the responsibilities of non technical airman involves assistance and support to the various functions ranging from weather forecasting to maintenance of records and files of the various branches of IAF. As this job involved the security and integrity of the nation thus the personnel handling these jobs need to be hardworking, loyal to the nation and of impeccable integrity.

ELIGIBILITY TO BECOME AN AIRMAN IN INDIAN AIR FORCE

Essential Qualification and Age for becoming an Airman in Air force varies from Metric to Graduation with some time asking for math, science and English as main subjects. It depends upon the type of entry (Trade wise) one is seeking for.

Passed 10+2 or equivalent examination with English, Mathematics and Physics; A minimum aggregate of 50% marks.

Between 16 years to 22 years depending upon the trade

Only male candidates are eligible to join Indian Air Force as Airman.

Between 20years and 27 years

An airman under the Technical Trades is involved in the production and testing of aircraft and flying related equipment. He is directly or indirectly responsible for the maintenance and overhaul of armament and ground equipment.

Educational Qualification required for this trade

An airman in the non-technical trades assist and support officers in the Air Force.
Educational Qualification required for this trade

BASIC MINIMUM REQUIREMENTS FOR ALL CANDIDATES

Height
To join the Air Force as an airman, the aspirant should be at least 152.5 cm. tall. There are however, some trades that have different requirements.

The aspirant should have a clear medical record, with history clear of any of the following diseases

Vision
Some minimum visual standards that the aspirant must fulfil in order to qualify.

The aspirant should have a minimum corrected vision of at least 6 / 12 in each eye. He could also have 6 / 6 in the healthier eye and 6 / 18 in weaker eye with spectacles with power not more than + / -5.50 Dioptres, inclusive of astigmatism in any meridian with full field of vision and Minimum CP-IV unsafe colour vision.

There are, however, other detailed visual and colour standards that are specific to different trades.

Hearing
You should have normal hearing i.e. you should be able to hear forced whisper from a distance of 6 meters in each ear individually.

Dental
You should have healthy gums and a good set of teeth.

It is advisable that candidates reporting for medical exam must ensure a high level of personal hygiene and bring the latest prescription and spectacles for corrected vision to avoid delay.

HOW TO BECOME AN AIRMAN?

The first step toward being an Airman is to apply against the vacancies declared from time to time in the leading news papers making it sure that you full fill all the basic and specific requirements of the job/trade applying for. As it is only after checking all eligibility wise application forms that one will receive an Admit Card that will contain all the relevant details like the date, time and venue of your examination. The subjects tested on will depend on the trade you have applied for.

There will be written test the subjects of which depends upon the trade one is selected for.
Technical Streams

English and Intelligence and General Awareness.

Note:- The examination is based on the CBSE (X/XII) syllabus

The pattern of the paper is in keeping with the basic minimum educational qualification required. Followed by an interview after the examination.

After clearing the written test one has to go through a medical examination conducted by a Medical Officer of the Armed Forces. In which one is either declared ‘Fit’ or ‘Unfit’ or ‘Temporarily Medically Unfit’ (TMU).

On successfully clearing the selection process the name of the candidate will feature in the All India Merit List displayed at the Airmen Selection Centres, where the tests were conducted. A call letter will be sent requesting you to report to the Airmen Selection Centre for enrolment. Here apart from the enrolment formalities, the candidate should take a Trade Aptitude Test, to determine the right trade for him. Depending upon the score as well as the position in the Merit List, candidates will be assigned to one of the streams in the Technical or Non-Technical Trades.

During training period an airman get a fixed stipend of Rs.5,700/-pm. On completion of training he start getting regular salary as depicted below.

As an airman, a large number of perks and benefits are also provided to him and his family to ensure quality of life that include, free accommodation, Medical facilities including specialist services, free ration and clothing, attractive life insurance cover up to Rs 5 lakhs, on a nominal subscription which also includes easy loans, Children’s education and also included a variety of recreational activities, which can be used by all airmen and their families.

Most important thing is that eligible airmen can apply for selection as an Officers  in Flying Branch within the age group of 19 to 20 years. Opportunities are also available for serving airmen for selection to the officer’s rank in the Ground Duty Branches (other than Medical Branch) as per the rules.After retirement, the airman is entitled to pension, medical insurance and gratuity, apart from canteen facilities. Besides the air force allows relaxation in age and reservation in government services as an ex-serviceman.

With time and expertise an airman can achieve the following given ranks during his stay in the Air Force.

Deserving candidates can also be promoted to the Honorary rank of Flying Officer before getting retirement.